An Opportunity to Give Back Skip to main content

An Opportunity to Give Back

Local Girl Scout Troop #17697 is unique group of young girls. Run by Tory Thelen-Woldstad for over two decades, this troop is for girls grades 6-12 who don’t have a troop, or who want to join but don’t have any Girl Scout experience. It’s for those who maybe haven’t found their place yet in the Girl Scout community, or those who want to try something new.

Like all troops, Tory’s troop can’t raise money for organizations, but they can do service projects and collect in-kind gifts and donate cookies each year to different groups. Troop #17697 was looking for a place to make their 2022 cookie donation.

The daughter of Nexus Family Healing’s Senior Payroll Administrator Rob Myran is in Tory’s troop. While at a cookie tabling event for the troop, Rob told Tory about Nexus and who we serve. Tory and the troop made the decision to donate 61 boxes of cookies to the teens served at Nexus Family Healing. These treats were sent to both Nexus-Mille Lacs’ New Trail Group Home and its Willow Trail Group Home in Andover.

But Tory wanted to do more. She connected with Stacy Sikorski, Operations Director at Nexus-Kindred, and Nexus Development Officer Colleen Rourke to coordinate “Summer Boredom Kits” for Nexus-Kindred foster youth. Tory created a flyer that offered up information about the youth served through Nexus-Kindred, and how these kits would matter to the youth, and spread the word throughout her community.

Tory and her troop then organized a summer drive as their community service project, organizing two events for other local troops to donate items. The first event brought in 150-200 people, along with a huge box of donations. The second event, held in mid-May, was a weekend camp where the northern half of the Girl Scout Council convened. With 250 people in attendance, Tory’s troop again was successful in collecting items, and two monetary donations totaling $600 for the purchasing of kit items.

These drives were a success. As Tory was packing up her car to leave the camp that weekend, her trunk was stuffed with gifts and camping supplies, with people still walking over to her with wheelbarrows full of other gifts for the foster youth. Since Tory’s troop is made up of teenage girls, they were particularly interested in making sure they bought items specifically for teenagers. With the $600 in cash donations, her troop were able to assess what they had and what they still needed. They spent $500.90 at Five Below, focusing on teenage crafts and journals, also stopping at Half Price Book and spent $60 on popular teen books. The troop bonded over shopping for others and spending time together.

An Opportunity to Pay It Forward

Tory's interest in helping youth in foster care comes from a deeply personal place, as Tory was in foster care as a teenager. “I remember being picked up at school and taken to a foster home and not being able to go home to get my things. Being in foster care as a teenager is so tough. You enter a new home and family with their own set of unspoken rules, it’s really tough…My dad was eventually granted custody of me so I could reunite back with family.” Tory knows first-hand that often when youth enter foster care, all they carry with them are the clothes on their back, which was why she wanted to focus on collecting items and activities for the foster youth.

During the gift drive, tragedy struck Tory and her family. “My dad died this past May, right in the middle of this entire drive. So, this was a way for me to pay-it-forward and give back,” said Tory.

When it came time to bring the items to Nexus-Kindred, Tory recalls saying, “I don’t mean to overwhelm you, but hopefully it is a good form.” She donated 5 bags of balls, 11 boxes and 8 large gift bags full of items for the Summer Boredom Kits. Through their immense time and effort, Tory and Troop #17697 have brought joy and excitement into the lives of Nexus’s foster youth, and would love to partner again in the future. 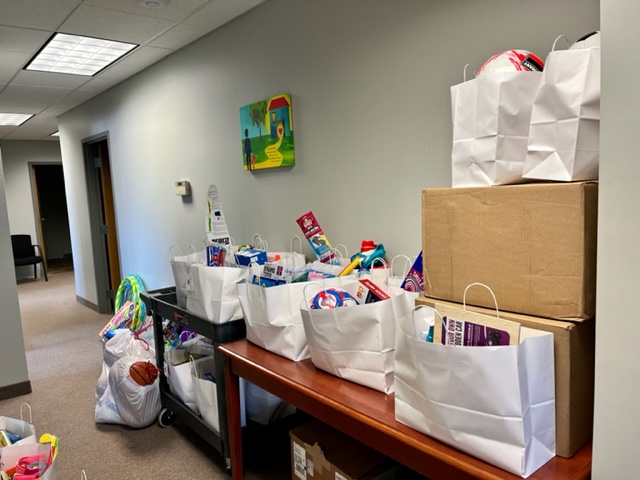 To learn more about Nexus Family Healing, sign up now!